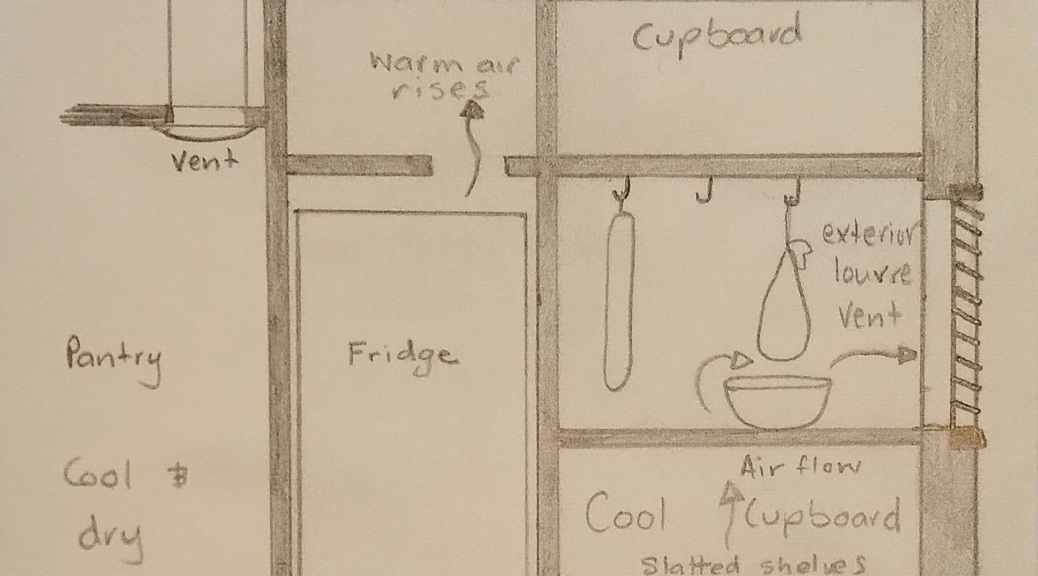 In smaller household’s wooden kitchen dressers often fulfilled the job of the pantry and meat safes or ice boxes were used for foods which needed a cooler storage space. Meat safes were a common feature on many colonial New Zealand houses. Often it was in the form of a small cupboard built on the southern wall of the house accessed through a cupboard door in the kitchen wall. The use of slatted shelves and ventilation kept the cool air circulating around the food stuffs inside. Louvred boards kept the rain out while still maintaining the air movement through the mesh covered opening. It is interesting to note that some houses in New Zealand were built with these on the northern side of the house, which really defeated the purpose of the meat safe. It is thought that the builders had not considered the difference in compass orientation from their practices in the Northern hemisphere.

Other variations of these cool cupboards were the freestanding wooden or metal ‘meat safes’ or ‘pie safes’ which were constructed similar to the built-in meat safe. These had the benefit of being able to be moved if necessary, depending on the season. Larger cool cupboards which were built into the interior kitchen cabinetry seem to have been built later in the twentieth centry possibly circa 1940’s to 1950’s.  Often these would be floor to ceiling cupboards with a vent under the house and another vent either into the ceiling or out through the wall. They relied on convection currents to remain cool, the warm air rises and exits through the top vents, which pulls the cool air up through the bottom vent. Several smaller cupboard doors were common to prevent cool air loss when accessing the food stuffs inside and slatted shelves to allow for maximum airflow. Obviously, these cupboard systems worked best for meat and dairy during the cooler months, but by wrapping food in damp cloths or placing them on stone slabs the cooling could be extended. However, in some places over winter the exterior meat safes occasionally became freezers, as outside temperatures plunged below freezing. More often these days the cool cupboard is used to store fruit and vegetables, and can in fact be a handy addition to a homesteading kitchen.

The ice box was more of a precursor to our modern refrigerator, which had a compartment on top for placing large blocks of ice. The cupboard below this was kept cool as it slowly melted, often these were free standing, but some were plumbed in so the run off was diverted outside or down a drain. Ice boxes were usually only appropriate for town houses as the ice would be delivered by the ‘iceman’ in blocks cut to fit the household’s icebox.

In hot, dry areas versions of a Coolgardie safe were used, this could be a wooden safe similar to a meat safe with a container of water on top. A hessian cloth or sack would be placed with an end in the water and draped over the safe, where it would slowly draw the water from the container. Usually, the safe would be on a veranda or other airy place so that any breeze would pass through the wet hessian and evaporate the water. This process would cool the air inside the safe and any extra water would fall into a tray below the safe. For larger cool storage areas, the same principles were used in an airy room. It would be hung with hessian curtains which would be soaked in water or have their hems sitting in trays of water. The evaporation and air movement would cool the room allowing perishable food items to be stored longer.

Evaporative cooling is used in many hot countries for low tech refrigeration, the zeer pot is simply a large clay pot with a smaller clay pot inside, the space between the two pots is filled with damp sand and a wet cloth placed over the top. The pot must be placed in a dry, airy space to allow for evaporation. This system has also been used in a large double brick walled structures with damp sand between the brick walls and a cloth, wood or woven cover. But evaporative cooling can only work in areas where humidity is below 40% and maximum daily temperatures are higher than 25°C.

On a still more basic level we have the camping trick of putting your perishables in a water proof container and popping them in an onion sack (tied to something) in flowing water or lowering them into the well (if you have one). While most people these days have easy access to electrical refrigeration understanding and utilising other methods can expand your cool storage capabilities and can provide better food security and preservation for low or no power situations.

For more food storage ideas check out our other articles…

Lard in the Larder

Sorting the Pantry or ‘Dry Larder’

4 thoughts on “The Meat Safe and Alternative Refrigeration”