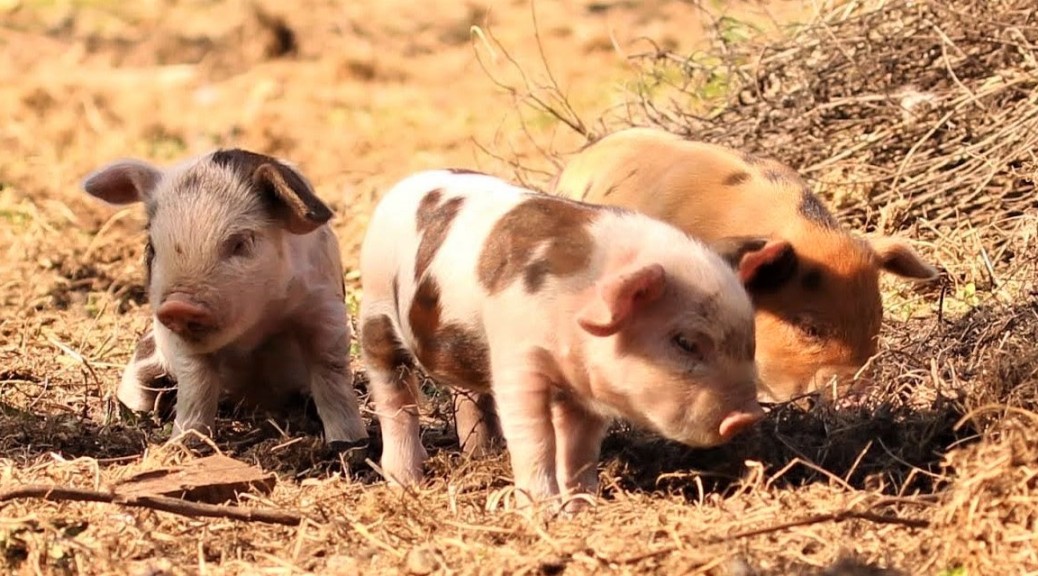 Tales from the Homestead

We live our life on a precipice and I’m not talking metaphorically here. Not far from our house is a cliff. A beautiful bush covered ravine with a fresh, clean stream winding its way to the Whanganui river. Steep walls of water hewn rock tower over head, hung with the lace of ferns and entwined with the clinging roots of brave trees. Cascading falls of sparkling mountain streams plunge into its depths, dark, cool and mysterious in the scorching summer heat.

It was into this gorge we lost a pig. A Kunekune who was destined for freezer camp on the next cool day. We think he knew and did a runner, or just fell off the top while chasing a walnut….

We searched the paddock and along the edges calling “Pig, Pig, Pig” no reply.  The Other Half scaled the steep track down to the stream, wading and kayaking its alternating shallows and depths, braving the giant eels in deep dark pools (or so legend says) But to no avail, the pig was nowhere to be seen.

A week later freezer camp prospect number two also disappeared. (Yes, I know we need to fence; we need to do a lot of things. Would you like to see the list of must do jobs?) Again, we searched with but no success.

Then a few days later 2 little pigs didn’t turn up for dinner (I’d like to note here all missing pigs where male…) This time however our searching and calling from the top yielded faint answering oinks and grunts from down below.

Now for someone afraid of heights living above a gorge is probably not smart. Searching for bloody pigs on the bush clad edge of such a gorge is just stupid. Especially when a quick swipe of an arm through thick ferns reveals nothing but air on the other side. Shudder.

But down the bank he was and at that spot there were fern covered ledges. So, with a strop tied to a sturdy tree The Other Half lowered himself over the edge, dropping 2 metres to a narrow track. He edged along the ledge calling the Kune, who promptly ran in the opposite direction. Sigh. Unfortunately these little Kune had not experienced much hands on attention from their busy humans and he was adamant this human could just stay the hell away.

We decided to try from the bottom. It was down the steep track again – we’re talking 30 metres or more almost straight down, dirt footholds cut into the cliff and timber ladder steps with dodgy hand rails. The light was fading making it even darker in the shadowy deep gorge. He waded through the cold bush stream calling “Pig, Pig, Pig”. The growing gloom creating a creepy, echoey, eerie feel beneath the damp rock walls and overhanging fronds. No answer.

Then turning to search further along the stream bed and towering rocky banks he spied a small shivering lump on the opposite side. The little lump didn’t move as The Other Half reached out and grabbed it. But as it rose into his arms all hell did break lose. The pig screamed and squealed, wriggled and squirmed, and BIT…

The ungrateful little sod was grasped super tight and bearing this heavy (25 kg+), loud and hostile burden The Other Half headed for home. He trudged back down the stream, struggled up the horrendously steep track, through the overgrown pine paddock, out the rickety wooden gate and back down the gravel road. Then tossed the cranky little sod over the fence into the pig paddock. Wet, dirty and deafened he strode back through the pig paddock, down the steep hill side to the tree with the strop. “Grunt, grunt, grunt” said the first little pig and ran along the ledge below.

Holding the strop, wrapped around his wrist, The Other Half advanced on the pig who ran along the top of what looked like another ledge.  But the softness underfoot revealed it was actually just ferns adhered to the bank by their trampled roots. Too late! he was already half way as the pig made a leap back up the bank. The Other Half grabbed its leg and held on fast, the added weight shifting the roots beneath his feet. He lunged back to firm ground the strop in one hand, screaming pig in the other. Then back up onto track above and to the foot of the tree “grab the bloody pig!” he yelled to his white knuckled wife and tossed it 2 metres up into the air. She grabbed it by the front leg hauling the rowdy beast back to safety and The Other Half scrambled back up too. With darkness upon us we retired for the night, weary and grubby, covered in mud.

The next morning the suspected escape route was blocked off and no more little piggies were lost. But our story doesn’t end there.  For one month after the first pig disappeared with no sign or sound of either pig. I heard a commotion, a screech and a squeal (me thinks I have spent too many years reading Hairy Maclery…)

Polly the sow was all in a rage, chasing a pig all over the place. And what should we have? who should it be? But one of the big boys come back for tea! Mum was a bit pissed that he’d entered her space, she let him know that he was a disgrace. But it soon settled down, piggy life back to normal and the prospect of bacon a delight to us all.